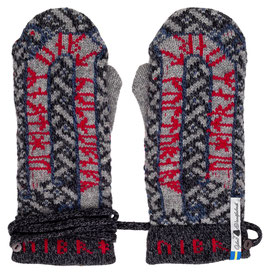 The Futhark mitten is inspired by Swedish cultural heritage, and with the help of the Futhark (a runic alphabet), we've created our runic inscription, "we honor our cultural heritage" which we then made into a pattern with a classic color scheme.

Use "Futhark" in Search to See All Matching Products

The Viking Age runic alphabet, known as the futhark, were used from Greenland in the west to Russia in the east. The runic inscriptions are the oldest preserved original documents and are an important link to ancient times. Although runes were initially found throughout the Germanic language area, it was in Scandinavia that they spread the widest and were used for the longest time. During the period from around 500–700AD, the Scandinavian language changed dramatically, which also created a need for modifying the writing system. In the early 700’s, a new runic alphabet was created with only 16 different characters, replacing the older one. Since the new runic alphabet began to be used at around the same time throughout Scandinavia, a lot of people have suggested that it must have been the result of a deliberate writing reform, perhaps created by traders.