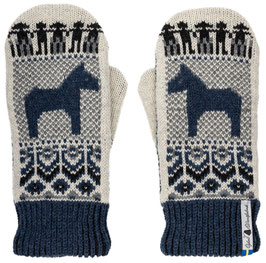 Owner-designer Åse Öjbro has created wearable art with these beautiful mittens adorned with one of Sweden's most well-known symbols, the Dala Horse.

Please also see our Suede Palm Dala Horse Mitten which is the same pattern but with suede palm for better grip.